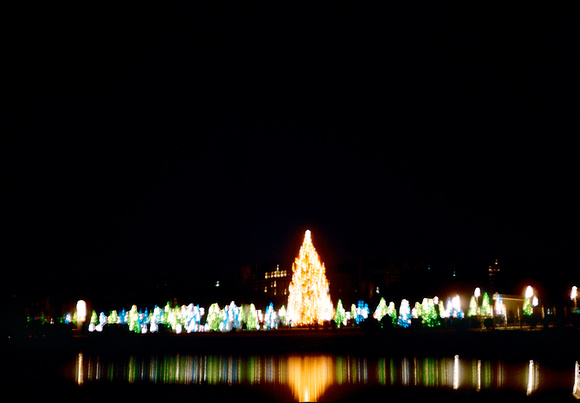 A collection still in development... In 2022 celebrating the 100th Anniversary of the National Christmas Tree! And the 60th straight year photographed by Al & Brian Nielsen -- COMING IN DECEMBER 2022!

There are more threads to this story than can be shared here. But after moving to the DC area in August 1963 (just weeks before Martin Luther King, Jr's historic March on Washington and "I Have a Dream" speech), and just a month following the tragic assassination of President Kennedy, Aldon Nielsen took his family to see, and photograph, the National Christmas Tree.
No grand intent at the time, but that was the beginning of a family tradition. Al went on to photograph the Tree for 50 years straight. And a 2006 front page article in the Washington Post on Dad's tradition essentially set me - his youngest son - up for seeing to it the tradition continues... [article at http://www.washingtonpost.com/wp-dyn/content/article/2006/12/20/AR2006122001796.html ]

The first 40 years or so of these photos have been scanned in high-resolution, pulled from Dad's slide tray as presented to so many groups over the years. The notes are largely from Dad's notebook which he used to narrate the slide shows when presented via his projector, with just a few minor edits.

The full set of Dad's selected photos, year-by-year, can be browsed by decade in the accompanying galleries. This is where you'll find his photo-by-photo notes...

Also included here are a couple of the television interviews..

Accompanying the onscreen slide show is Patti LaBelle's "Holidays Mean More to Me" -- a song I happened upon and fell in love with in December 2012 as we were losing Mom, and as Dad finished his 50th year of photographing the National Christmas Tree. I had the opportunity to meet Miss Patti just a couple months later, and surprise her with how much this song meant to me at such a touching time.

The National Park Service has a nice history of the National Christmas Tree (including a number of Dad's photos) online at national-christmas-trees-through-the-years.htm

Trees of the States and Territories

Press and Other Photos